At the moment it seems like the problem only occurs for other languages than German (e.g. Dutch, English, …) and mainly for iOS users in combination with Google Home.

Unlocking works fine in German (also German on iOS) and also for most Android users. Strange thing is, the code is the exact same for all languages, so we think it might be a problem on Google’s side. 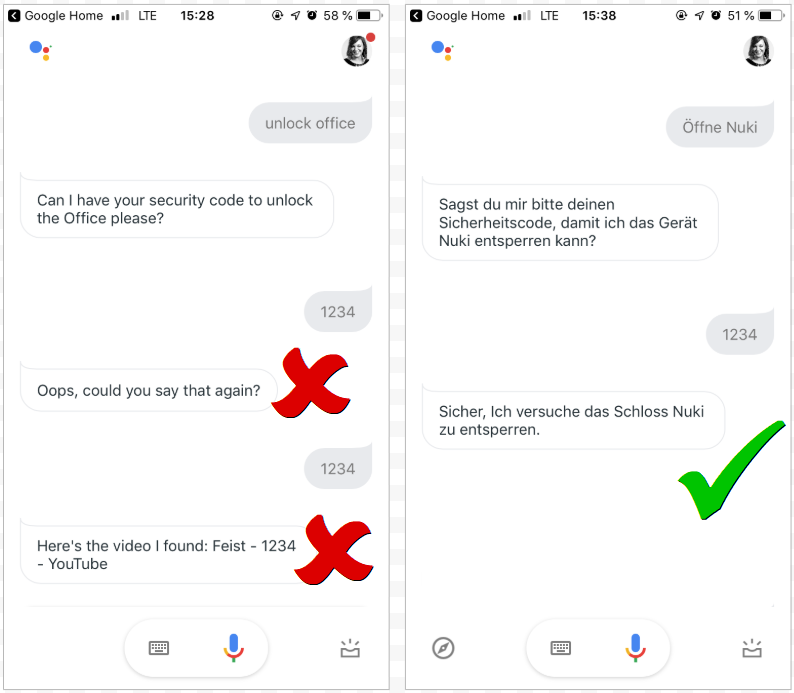 We are already in contact with the Google support. We let you know when we come up with a solution!

Just dropping in to say that this feature appears to be working again using the English language (UK)!

Also in English it doesnt work to me, it says google is not aloud to unlock doors.

Hi Jesper, you only get this feedback when you are using the Nuki Custom Action, with which it is not possible to unlock doors.

Please use the native Nuki Smart Home action to be able to unlock the door.

In the commands you have to use the name of the device, which you can change in the Google Home App.

Nuki is already installed, when i talk to them in Dutch it says; Voer hiervoor je beveiligscode in, deur ontgrendelen. (Ask for code).

When i say; hey google, unlock door. Then it goes to Nuki and a diffirece voice tell me its he’s not aloud to unlock the door. I can send a video if thats better.

Do i need to send a video of the problem?

In the Netherlands Google Assistant is not allowed to open the door!

But also when i talk in english;
Google ask nuki to lock the door > Sure request for unlocking door.

But when i ask;
Google ask nuki to unlock the door > google is not aloud to unlocking doors.

Region settings The Netherlands is independed with language settings

When will it be available in The Netherlands?

If you are fearing that someone could find out that security code and use it from outside you shouldn’t enable that feature at all.

I found out what was causing my issue with unlocking the door with the PIN. I had a PIN with the number 2 in it, and when i would say my PIN 1234, I noticed the assistance picked it up as 1 to 3 instead of 1234, so it would say sorry can’t help with that.

Hope that helps anyone.

I have the same problem. I found out that if you speak out the full code as one number, Google Home understands it. If you say it per digit, it doesn’t work. Example: 1234 would be ‘twelvehundredthirtyfour’ instead of ‘1, 2, 3, 4’.

Locking the door using the Dutch language works flawless, unlocking the door using pincode doesn’t work. I wil get the lock graphic on the Google Smart Display and Google asks me for the security code but if i speak out the code the Assistant begins to play a number on Spotify… very weird!

The assistant does that if I give the numbers one by one like 1 2 3 4 but also as one number twelvehunderdthirtyfour,. In both cases Spotify begins to play an number 1 2 3 4 or 1234. also in the English language!

does nuki already support this in dutch ?

Problem solved…1234 does not work, using another code will work.

Is it true that Nuki can lock and unlock (with a pin code) the door in both Dutch and English, but cannot open the door? I can’t get it done. Locking the door is very easy. You can unlock the door with a PIN code. However, opening the door is not yet possible via the Google Assistant. Would be very nice so that you don’t always have to have your phone in your hands when you want to open the door.

anyone other experiences with opening door via Google Assistent?