After several searches, I couldn’t find any help for my problem.

I try to connect an Opener on a URMET 1132.
I followed the Nuki app tutorial precisely.

Here is a photo of the wiring.

During my tests the bell rings when someone presses the doorbell, but the door does not open.

Anyone else having the same problem as me?
Thanks in advance for your advice and help. 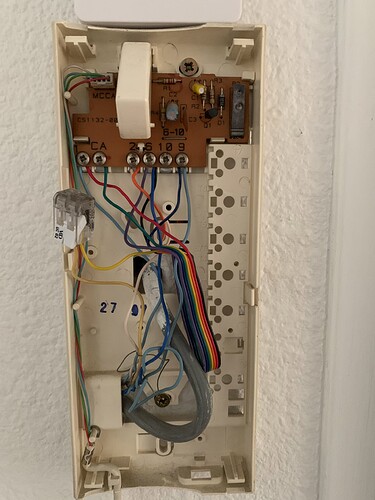 Hi! What is functioning and what not? Or do you need a full wiring tutorial! I wired several of these with the opener, and should be able to guide you, if needed!

Hi Rose, thanks for your message

I would like to enable the “RING TO OPEN”.

During my last test : the bell rings when someone presses the doorbell, but the door does not open.

Yes if you have a full wiring tutorial, I take it !

Ok. But the opening function works so far, is that right!?

The Nuki Opener not seem to detect the call.

Ok. If you don’t know the two wires of the intercom for opening then please do this to find it, - Take a short isolated wire, and take some of the isolation off on both ends, now hold one end on the first screw in the intercom, and the other end to the next screw, if the opening goes off then they are the right ones, if not try the next screw, and go through all screws this way, until you found the two right wires for opening, and notice the number of these two screws. Then get back here.

Did you ever manage to get this working? I am considering putting myself in the same situation

Hi! Do you have the same intercom?

Yes but I have no experience with the Nuki yet as I just bought it and haven’t had the time to install it yet. I hope to have tried it out next weekend.

Ok, let me know, if you need help.

Thanks. I most definitely do since I can’t find any help in the Nuki app on how to wire the opener to the intercom. Isn’t there any official documentation available?

@Rose_Languste This is what I have. I think it’s some kind of URMET 1132. I can’t upload photos so instead I’ll share the link to a photo I took of it: iCloud Photo Sharing

Thanks a lot for any help to get me started.

Hey and thanks. I can assure you that the intercom is analogue

I have uploaded a photo of the intercom with the lid off so you can see the insides to the share listed above.

Thanks a lot for your help. I would have no idea on what to do if you hadn’t been around.

No problem! The nuki support is very good but unfortunately it seems understaffed!? But in the meantime, I helped to wire many different intercoms to the opener (even often models what are not officially compatible, and even where the nuki support tried to help but has given up in the end, we found still a functioning wiring), that it is a little hobby now! So, when I look at your intercom inside, it is to see, it is a analogue intercom, but wired digitally, because you have on every screw a second wire, what is not normal on analogue, just on digital, so I think they wired it hybrid!? So let us begin to sort some things out, please take a short isolated wire and take some isolation off from both ends, now hold one end on one of the screws and the other end on a other screw, and when the opening mechanism goes off when you hold the wire on the right two screws, you found the right two screws for opening, - please try this in all constellations and so long until you found the right two screws for opening (is easy and fast to do), then notice the numbers of these two screws and write again here, and we go to the next step.

Allright. So just to elaborate I need to find out which of the 5 wired screws, when shortcut, makes the opening mechanism go off? Just making sure I understand.

Another thing I was wondering about: I was looking at the opener and got a bit confused as to how to connect the opener to the intercom as there’s a micro usb connector on the opener but the only cable in the box is a flat ribbon cable with a connector that doesn’t match anything on the opener. Did I misunderstand or did I get the wrong cable? I uploaded a photo of it to the share with the other photos.

For point-1, yes right, when shortcut the right two screws, the opening mechanism goes off.
For point-2, the little usb-port on the opener is just for when you want to use the opener without batteries, and a direct power supply instead. The other cable is for wiring the opener to the intercom, and when you look closely, you have on two sides of the opener a port for it, where you can choose one of them, for the mounting orientation of the opener, and these ports are protected with rubber-plug’s, what you can take out, and then you can use on of these two ports, as you want.

Hi again and thanks for the clarification. And yes, those plugs are very well hidden so no wonder I overlooked them.

I’ve found out which screws needs to be shortcut to open. I’ve marked them on the photo of the intercom board and connections in the shared folder.