you can upload a picture of your wiring. I got Bticino 344212 working.

Configurations works with both and also the open with App works.
Mostly works Ring to Open for the first few days and then stops the working Ring to Open.
Wiring is correct I did also try the minimal installation with BUS+ & BUS-.

Support is informed and they did modify some values of the Firmware 1.5.1 and then it did works a bit better but at least did the Opener again stop with a working Ring to Open.

My Opener did works 9 Months without problems and very precise and after the Update to Firmware 1.4.4 was the problem coming in.

Also when Ring to Open works the protocol doesn’t shows unknown rings…
Personal I think it’s a value problem because when the Bus system is closed and connected to my intercom with the first ring then it shows also other rings. (first ring and Bus connect) nothing is shown but a second ring as long the Bus system is closed (between 60sec) is shown.
With a lot of luck does also the second Ring activate ring to open.

Is there a way to modify the Firmware value like the support?

I think the NUKI DEV Team really has some major problems with some Bticino devices!
I know that they can’t support all manufacturers, but if it is so unreliable, they shouldn’t promote this device as fully supported on their website!!!

Hi Marco, I just sent you a PM

Hi Peter, I just sent you a PM

I’ve activated debug mode and since then all my problems (except ring suppression) are gone. It seems that debug modes prevents the opener to fall into a deep sleep mode where it doesn’t recognize unknown rings.

I’m also facing issues with Nuki Opener and the Bticino 34412. The setup works fine and everything seems working (including bell supression). When I try the Ring to open feature a few hours later, bell supression stops working and I also have to open via App, because Nuki does’nt detects the ring.) Sometimes it works, but most of the time it doesn’t.

yesterday I installed the NUKI Opener at my Bticino 344212 and have the same problem as mentioned above - the installation process works until the Opener should open the door, but the door never opens. Does the Debug mode workaround still exist? NUKI Support was not able to help me yet.

Have you tried the debug mode?

Hi Rose, I don’t have a clue how the debug mode works and so I’m not able to test it.

Push the fild what I have drawn in, in the picture so often (about 7-8 times) until a message comes up what says something like “debug mode enabled”! Let me know if it changes something!? 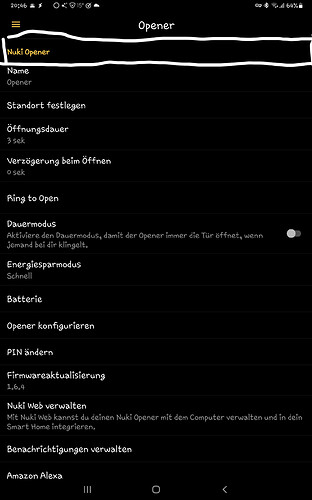 Hi Rose, thank you for elaborating. I just activated Debug Mode as you described. But nothing changed. Do I have to go through the installation process again?

No problem! And yeah, try a new installation from scratch, because it seems on your system, the signals are not always the same, and when they are changing, your opener learns and saves the signal once, and this work until the signal change, and the opener doesn’t see it anymore, - but with debug mode, it looks and listen for changes, and tries to adjust itself, or save a set of signals, so I would try to make a fresh setup!

Hi Rose, I just went through a fresh setup with debug mode activated - unfortunately nothing changed. I even tried it, just as Nuki Support recommended, the setup step where you have to ring the intercom first to open the door (which is not necessary in my case with the normal intercom), that does not work either.

I guess there is currently an incompatibilty of the Nuki Opener to the Bticino 344212.