Nuki Opener: Send door open signal twice / allow Ring to Open to be used twice within a minute before deactivating

I use the door opener not only for myself, but sometimes also for delivery people. So, not everybody is immediately aware that the door opener will open the door quickly after ringing.

Now there’s a complication with the setup of the door system in the house I live in: The door opener time is limited to a second only, therefore in many cases, the door opening is missed by a person standing outside (usually not me, but others). The workaround my neighbors and I use, when using the door opener manually, is to press the button twice in quick succession. It would be useful, if the Nuki Opener could do that as well.

But sometimes, when I am not quick enough with the door opener to press the button twice, a person outside might be ringing the door a second time. In this case it could also be a useful option, if I could allow the Nuki Opener to be used twice in a row within a short timeframe (maybe a minute), before the “disable Ring to Open after a single ring” feature triggers.

Both would be useful options.

Well, due to the fact that I don’t know when exactly someone will show up, I have to set the enabled time for ring to open not only to a few minutes, but already to let’s say an hour. However, I would prefer very much, that after this person’s arrival the ring to open is disabled rather quickly.

Or let’s say another title to my feature request would be: “make deactivate ring to open after one ring work for my house”.

Ok, have you thought about ifttt or the api to do this?

i voted, i would prefer for the opener to buzz the people in twice.
it takes 2 seconds for my opener to react. and then it does a relatively short buzz. as teh delivery guys are staying in front of the intercom, they miss the buzz

if the nuki would buzz twice one after the other it would be so much better.
so can we please have that

When I remember rightly, in expert settings, there should be a option for the duration time for opening, and just edit the time twice as long as it is now, thanks you have nearly the same!

unfortunately no such thing for the opener.
that would of been my first choice, but as in some cases (mine included) you might have a bus system, it would be easier to have it opened twice than figuring out how to extent the “buzz” in the bus communication. As the bus communication is mainly a record and replay the message type of configuration.

Expert settings are not visible in normal state, you have to unlock it before in the app, and only then you get this option, and are able to use it!

expert settings do not exist on the opener, only on the lock.
otherwise please post a photo as i could not find anything in my app.
also googling returned nothing.

Thats the thing, I don’t remember how the procedure was, to unlock it!? But I looked I my opener, and the duration is a normal option, and I can freely choose, how long it should open!? I make a screenshot, and post it here shortly! 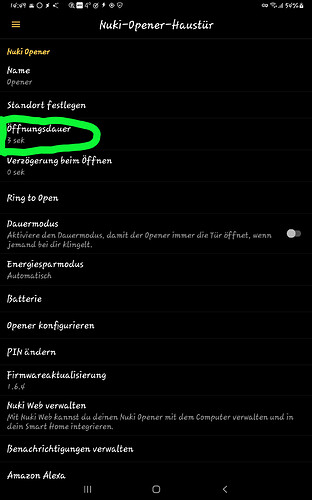 can i ask you what intercom you have?
my guess it might be an analog one, so that’s why you have it.
mine is bus based: ritto
i am missing exactly that field.

Mine is a hybrid what can used for both, and the momentane configuration is analogue, yes! But it should be no difference, because the recorded opening signal will just playback longer!?

And there would be a second way over Alexa or ifttt, to do this!

i don’t have an alexa or use IFTTT.

but for me, i see the digital being a problem. as if it is really a digital signal, Nuki does not know which part should be played longer.

The signal is normally very short, and is just repeating, like when pushing on the open button of the intercom, and it opens so long you push on the button, - it repeats until the button is released.

hmm. unfortunately I don’t have this setting and I have no idea how to activate it.

How is the behaviour of your intercom, when you push the opening button, do the buzzer open so long you push the button, or opens it every time the same duration time!?

it does it. but again i have no idea where to get the buzz duration setting.