It is about the Swipe function. Set is

It happens, however, when sliding to the right, that the door is opened.

Furthermore, the progression of this process is wrong. As you can see in the screenshot, first a “Door opened manually” was displayed and then a “Door opened by JB”.

In reality, the door was swiped to the right, i.e. actually only unlocked. But the door was opened and jumped open. This apparently created the “Door opened manually” entry in the log file.

But also the following text “Door of JB opened” is correct in the sense of the action performed, but fundamentally wrong, since the swiping setting is “unlock” and not “open”.

Here you can see the timestamp of the Smartphone Screenshot - it is exactly the same as the “Door opened manually” report. 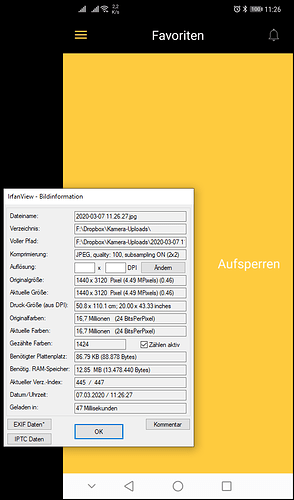 Could you provide a screenshot of the activity log for that time to see what the Smart Lock actually logged as lockAction?

This is the same - only that I used the screenshot of the ioBroker adapter in my incoming post.

Thanks.
I could not reproduce this behaviour. Please send a log file (best with debug mode on before retrying - see below) to our support team at contact@nuki.io, so they can check the details of what happend.

How to send a log-file Feedback

If we ask you to send a log-file please always only do this via e-mail or private message! Open the hamburger menu of the Nuki App and select Help at the bottom of the list: [log-file_help] Scroll down to the Error log section and press Send error log. (For more information in the log, enable Debug mode and repeat the process that caused the problem before sending the log.) [log-file_debug] This will open an email draft with the log-files attached. Please include a short description of th…